theatre games for all 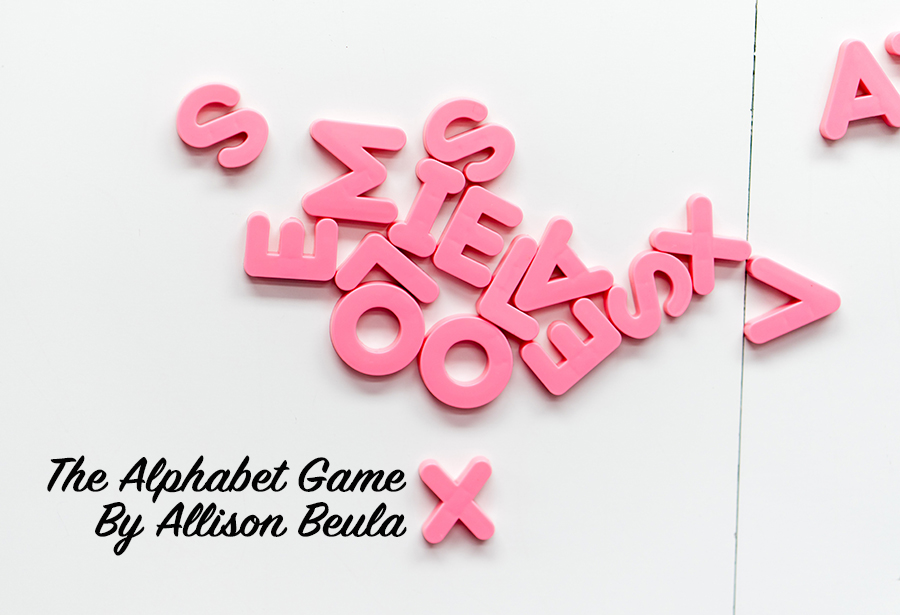 Appropriate for Ages 8 to Adult

Here is a quick, easy and fun drama game that can be played by any number of people, from one, to as many as you like. it can be modified for all ages and levels!

The key to any great theatre game is adaptability. This game can be played quickly, or over a long period of time, with as few or as many as you like, and easily at home with no props or even space requirements!

There are many, many versions of this game. This is my own version, and I like to play it in consecutive rounds, where each round has an extra challenge or difficulty level added. Basic Objective: A family friendly word game that allows you to compete either against one another, or even as a group united together for the common good against the alphabet! Optional From the Top: You can play “timed” versions where you have to say a word in X amount of seconds or else you automatically pass to the next player who then gets the letter the player passed on.

round one: the intro

Remove the “caller” so now each player keeps track of the alphabet based on the word that came before them. As a bonus challenge, try not to repeat any words said in round one. Player one “Asparagus”, player two “ball” etc. If someone jumps a letter you can decide if they miss their turn or you can give them a reminder.

Pick a theme or topic. Start simple - something like “fruits and veggies" and decide if you can repeat words from previous rounds. You can nominate a “caller” to say the next letter of the alphabet to keep everyone on track. Or you can go hard-core and have no reminder, and do it in a timed round to see how many people get flustered by the pace. For example, “A” is artichoke, “B” is beans and if someone cannot think of anything in the theme in a certain set time (say, ten seconds) they can PASS. This means if they had “C” and drew a blank, they can pass and the next person gets “C.” If that person blanks, then it passes again. This is a great way to keep on your toes, and it forces you not to expect or pre-plan for your letter. Passing keeps you ready for anything!

If you don’t want to play one at a time, play a call out round. A caller yells “A” and the first person to think of something in the category yells their answer. Maybe multiple people shout out great things at once, and then you move to the next letter.

When a theme is tricky, or a letter (like “X!”) gets in the way, you can choose to pass as a group. For example, not many “X” fruits! Or be clever, you can allow things like “eXceptional grapes.”

Adapt this game to your own needs and your own personalities. There are really no rules, other than having fun! So please, Amaze, Be Creative, Drama Exists For Groups!

let us know what themes you come up with in the comments below or on our social media!

Allison Beula holds an Honours B.A.A. in film and is a recipient of the “Norman Jewison Filmmaker” Award. She furthered her training at The Randolph Academy For The Performing Arts, for whom she currently Directs, Choreographs, and Instructs. She is also on faculty for The Avenue Road Arts School and VIBE Arts. She has lead workshops and classes for dozens of institutions including: Mirvish (Lion King),The Toronto and Catholic School Board, OISE, and The Ontario School of Ballet to name a few. She trained with Upright Citizens Brigade and Dance Manhattan (NYC), and is a graduate of the Second City Conservatory Program.

Allison is a two-time recipient of an Ontario Arts Council grant for “Artists in Education”. Allison’s musical “The Tiki Bikini Beach Paradise Party A-Go-Go!” which she wrote, directed, and choreographed, made its debut at the 2011 Toronto Fringe Festival where it won “Patron’s Pick” and “Best of the Fringe” and then continued on to be in the January 2012 “Next Stage Theatre Festival”. Her choreography can be seen in the video “Hypnotized” (Jeffery Straker) which hit the “MMM” Top 10. She also choreographed for “CBC-CBC Days Live” and she continues to direct and choreograph multiple productions across the city every year.

As a performer she has appeared in dozens of musicals, music videos, and improv shows, and frequently makes appearances for SONY entertainment as a “Smurf” (Santa Claus Parade, Woofstock, TIFF Smurfs-Lost Village Gala Premiere). She recently made her television series debut as a principal lead, performing “DURP-E” the loveable robot, in Season One of “Oh Yuck!”